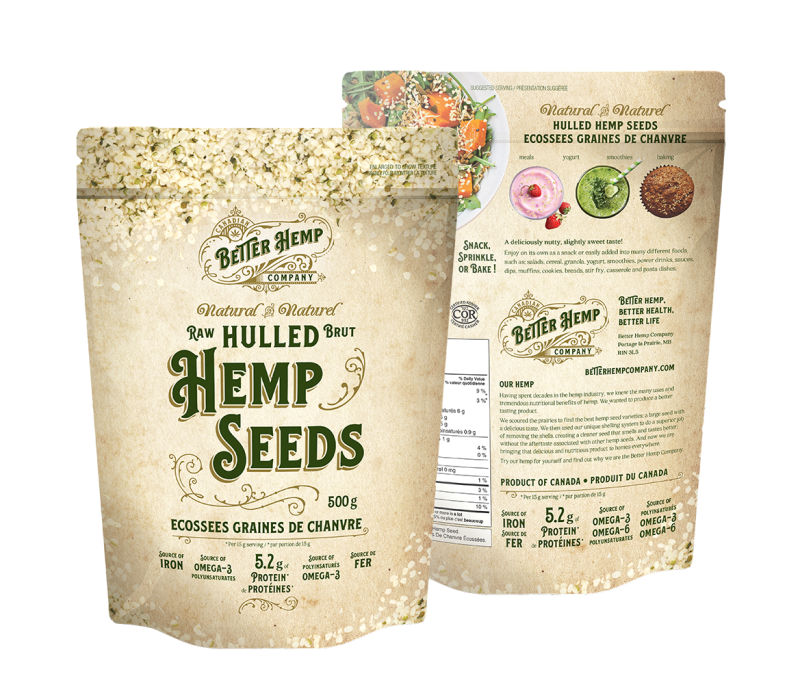 Opportunities continue to crop up for a Manitoba-based hemp company that tapped into an innovative program to bolster its international reach.

Better Hemp Company has grown a solid reputation by selling foods made from homegrown hemp seeds.

The bustling business made its first sales to South Korean companies in 2017. After that, the customer base grew to include Canada, the United States and New Zealand.

“Hemp seeds are a nutritious and versatile food that are rich in protein, essential fatty acids, polyunsaturated fats and numerous vitamins and minerals, including iron, magnesium, manganese and potassium to name a few,” explains CEO Dan Kreklewich.

“They can be eaten on their own as a snack, in cereals, yogurt and oatmeal, and on salads. Food manufacturers use them in granola, energy bars, spreads, dips and numerous other foods.”

A few years later, Better Hemp Company enrolled in the Trade Accelerator Program (TAP) offered by World Trade Centre Winnipeg. This dynamic program endeavours to help companies expand their existing export market while also assisting those that want to start exporting.
“Our experience with TAP is different than most. It is more of a story of regret — regret that we didn’t take the program sooner,” Kreklewich says.

“We had been exporting to Korea and the U.S. for several years before taking the program. The program has been helpful to us in addressing international tax issues and a few other things, as well as planning our retail launch.”

Unfortunately, Kreklewich and his team learned some lessons the hard way.

“In 2018, our first U.S. customer purchased a large volume of hemp hearts from us and went bankrupt before paying,” he says.

“We suffered a large financial hit that wiped out our profits for the year. It was also a big hit emotionally.”

After suffering that loss, they discovered the export insurance program offered by Export Development Canada, which insures up to 90 per cent of unpaid accounts. “Had we known of this insurance before starting our exports, we would have been spared that huge loss. And those are the types of things covered by the TAP program. They actually have a speaker that spends a significant amount of time on that insurance coverage,” Kreklewich says.

“The TAP program covered other things on sales and marketing, trademarking, foreign tax and more. Before attending TAP, we learned about a lot of these things the hard way, by trial and error. It would have been much better to learn about it through TAP. We could have saved a lot of time, energy and money.”

Today, the local business continues to flourish. In addition to selling hemp hearts in bulk to other businesses, Better Hemp Company recently started producing its own retail packaged hemp hearts and just launched its own hemp heart almond butter. These products are sold primarily on Amazon.ca and Amazon.com, and they will be sold soon in Vita Health and other Manitoba locations.

Over the next two years, they plan to add numerous new products that incorporate hemp hearts, including hemp heart peanut butter in early spring followed by hemp-nut cluster snacks.

“It will be exciting in 2022,” Kreklewich says, “as we are growing our bulk business and separately launching a retail brand of great foods.”